What happens to the surface area of a cylinder when you double the height?   I posed this question to my students as a Commit and Toss formative assessment last week because I wanted to see if they would realize that while the volume has doubled, the surface area has not. 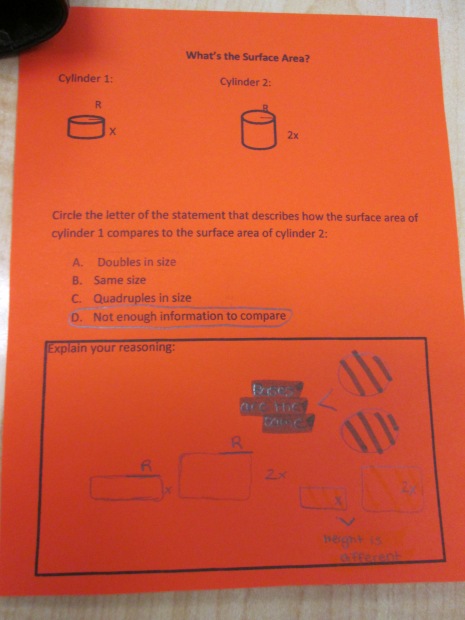 As we discussed the question (which is the final stage of a Commit and Toss formative assessment), I was really pleased that the response I got universally was that the volume doubled but the surface area did not.    They talked about the fact that the area of the bases had not doubled, only the area of the “side” had.    (This was a definite win after the previous Commit and Toss activity – see my last post).

Since things went well, I followed up with the question of how things would change if the radius was doubled.   No one was quite sure, so we took some time to explore the question.   It was a good day.   It’s always a good day when students want to know more. 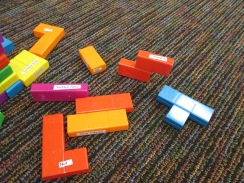 I make part of the review for the test on Surface Area and Volume a series of stations that review different concepts from the unit.   One of the stations is a Tetris Jenga game.     This is a variation on the traditional Jenga game in which the blocks are the shape of Tetris blocks.     The variation in shape lends additional challenge to the usual Jenga game.   It also provides some interesting 3-dimensional shapes to explore. 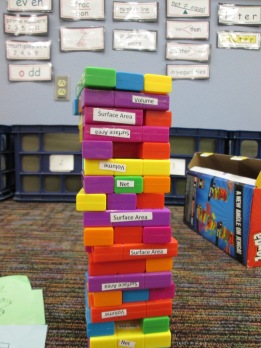 At this station, I have set up the Tetris Jenga tower.   A player draws a block from the tower and must perform the task on the block.   Each block has a label directing the student to make a net, find the surface area of the block, or find the volume of the block.    Because the blocks are 1/2 unit thick, the task also requires students to practice these tasks with fractional values.     I have an answer key at the station so that students can verify the accuracy of their work.

In a normal game of Jenga, successfully drawing out the block ends a turn.   I require the students to correctly find the net, surface area, or volume to keep the block.   I have an answer key with the station so that students can check their result.   If the solution is incorrect, the player must put the block back on the top of the tower. 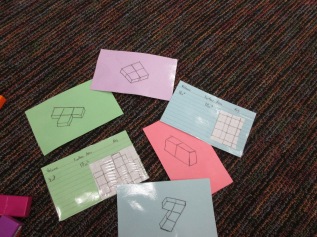 I bring this game out again from time to time after the conclusion of the unit to keep the concepts of nets, surface area, and volume fresh.   I have students play it during the last five to ten minutes of class every so often.   This keeps the concepts fresh for those who have mastered it and gives me a chance to do some re-teaching with students who don’t quite have full mastery at the end of the unit. 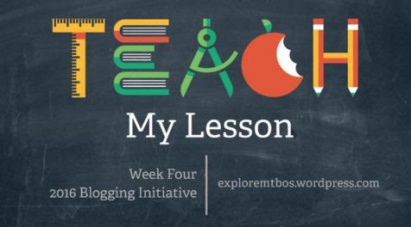 Gung Hay Fat Choy, Saint Valentine!   East meets west in the southwest.   It’s actually not quite as strange as it may seem.   First though, a little context because math, like life, makes more sense when seen as part of a larger story.

My class is in the middle of a unit solving problems relating to surface area and volume.   The unit began by exploring the area of two dimensional shapes (parallelograms, triangles, trapezoids, circles, and irregular or complex shapes).   Next, the class began exploring nets and the area of nets.   The lesson just prior to this lesson had students creating nets for a rectangular prism with a square base and finding the area of the nets.   They explored the idea that the same 3D shape can have many nets but that all the nets have the same area.   Some students found the area by treating the net as an irregular shape (decomposing the net into parts and summing the area of the parts).   Other students summed the area of all the faces (while this is also decomposing the net, it is in a more prescribed way). These were Connected Math lessons (a research-based constructivist curriculum).

The next lesson was slated to be further exploration of rectangular prisms with rectangular (rather than square) bases.   I felt my students were ready for greater challenge but wanted to stick with the plan of allowing them to construct an understanding of surface area.

After a quick entry card in which students had to find the net of a triangular prism, the class watched a short video clip of a dragon dance.   (While they were watching, I touched base with any students who had made an error on the entry card.) Then, we had a brief discussion about the dragon dance and the fact that lunar new year is next week.   We talked a little bit about how different families celebrate the new year.   At that point, I explained that, since next week was both the lunar new year and Valentine’s Day, I was thinking about sending a care package to my daughters away at school.   The care package provided the context for the lesson.   I told them I was thinking of sending a gift card (in lieu of the red envelop filled with money) in a gift card box, a canister of green tea (because oranges in the mail might not be the best idea), a Toblerone (because of course they would expect some chocolate for Valentine’s Day), and a can of green chile (because that is the food they miss most from home).   Since it was a surprise package, it would be fun to wrap everything.   I wanted to keep costs down, though, so I needed to know how much it would cost to wrap each item before making a final decision about the gift wrap. 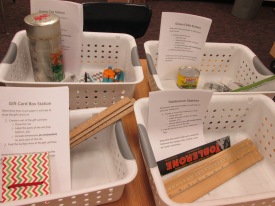 I created four stations for students.   Each station contained one of the items to go in the care package.   Students needed to create a net, label the faces, and include the dimensions.   Next, they needed to find the area of the net.   Finally, they had to find the cost of the paper to wrap the paper given that the paper cost 1/10 of a cent per square centimeter.   Students in each group had to reach a consensus on the area and cost before moving to the next station. 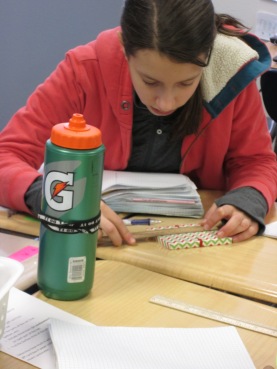 I expected the most likely error to be students multiplying the area by 1/10 rather than by  1/1000 to find the cost.   That held true.   A shocked expression at the proposal that I pay $23 to wrap something was followed by questions about what it means to be 1/10 of a cent. 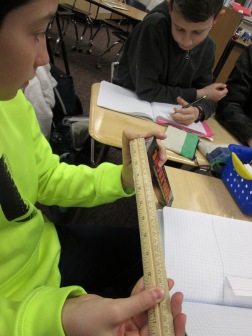 I expected students to take the easy way out and simply assume that the triangular prism was built on an equilateral triangle base. They pretty much held true to my expectations, so we had some interesting conversations about the need to verify assumptions.

Some students readily made the connection to a can label as they grappled with the net and dimensions.   Others played around with the idea of modeling the can.   Most grabbed a piece of paper (often, one of the task cards) to create the model.   Almost all of them then made the connection to the rectangular shape and the idea of the circumference as one of the dimensions. 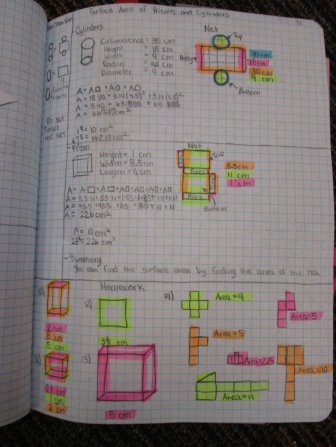 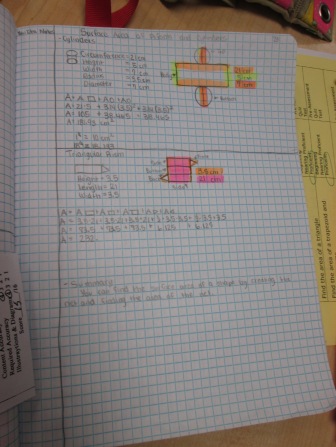 I thought that we should be able to move through all the stations in a single day, but things took a little longer than expected.   I wanted kids to construct their own understanding at this stage, so I chose to let them take the time necessary to do that.   I extended the lesson into a second day to finish the stations. 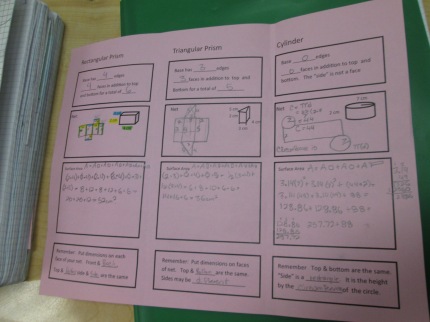 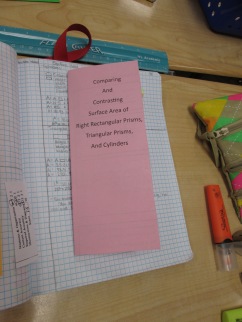 I also created a modified version of the foldable for two of my students.   The modified version provides a little more explicit guidance with regard to some of the sequential steps in finding the area. 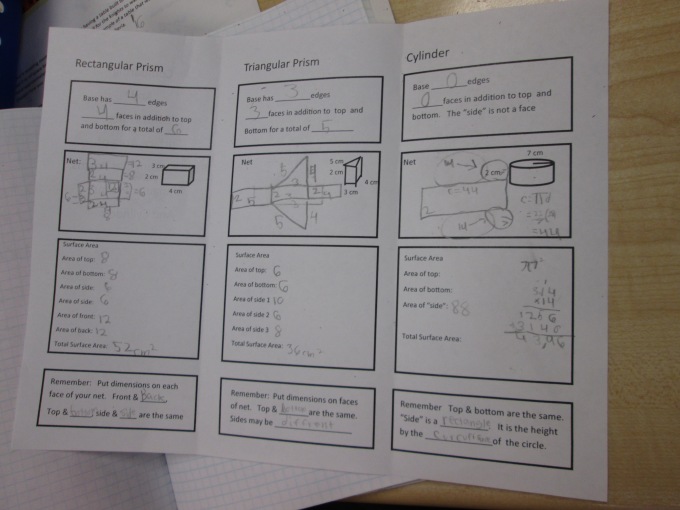 Tomorrow, we will explore surface area for a fixed volume.